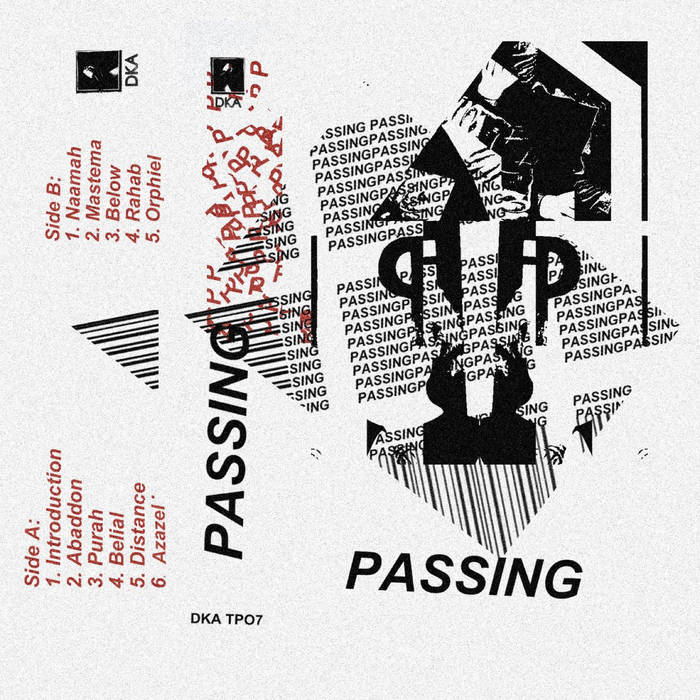 plastov Pre-ordered on the strength of Abaddon; it's a killer taste of what is to come, I suspect.

ben bulcock This is what I want :) A brilliant aggro take on the best bits of goth, post-punk and industrial. Passing sounds like something new, something exciting. It feels special. Excellent stuff. Favorite track: Below.

DKA is proud to announce the debut cassette from Passing (AKA Christopher Myrick.) Passing hails from Los Angeles and has been active on the scene for the last couple of years. Myrick was initially a founding member of Bestial Mouths but left the group and started Passing as means of exploring a more minimal sound. After a brief stint as a duo, Myrick decided to make Passing a solo project. For his debut self-titled full length on DKA Myrick has submitted eleven tracks of pulsing EBM that manages to sound like the future-past of EBM and Industrial music. One could imagine this as the lost early demo recording of Skinny Puppy or Psyche but from a dystopian future twenty years from now. That’s what makes this recording so interesting: it conjures up DIY post-punk cassette culture harkening to lost tape classics of cold-wave like Trop Tard. At the same time, there is a definite hint of the chic, futuristic EBM sound of Phase Fatale or Silent Servant. However, it is Myrick’s vocals that really make this release standout from other contemporary EBM offerings. Passing has all the snarl and grit of Skinny Puppy on some songs yet can also drift into a more classic goth register. In some ways the vocals are reminiscent of Roz Williams of Christian Death on “Only Theatre of Pain,” showing a deeper, more emotionally vulnerable quality while other times sounding more like the staccato vocals of Cabaret Voltaire. DKA is proud to work with Passing and include him in our family. Passing first appeared on the DKA roster with “Sacrifice” on the Strategies Against the Body Vol. II and then a more recent appearance on DKA
Tape Programme Vol. II with “6122-2”.