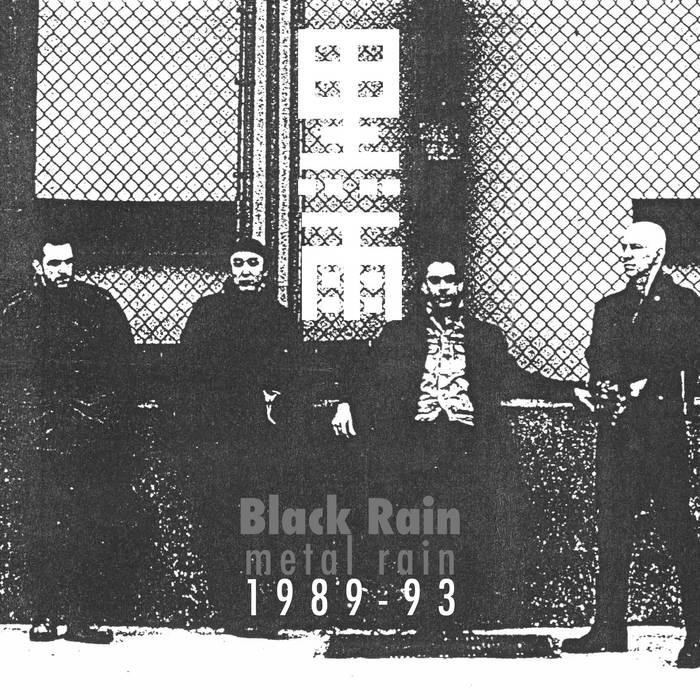 DKA is very honored to be able to present, on vinyl for the first time, Black Rain's "Metal Rain" 1988-1993. This archival release captures the group at a time when it was experimenting with a more traditional 4-piece rock set up (drums/guitars/bass/vocals), although the results are anything but traditional. Interspersed with bits of scraping ambient and textural forays this is a record full of thrash and riffs and energy. While the palette is far removed from what fans might expect based on their more recent output, the core aesthetic ideas and principles that drive those tracks can still be heard throughout this wildly different format. The result is surprisingly varied and extremely dense and rewarding.

The history of these recordings is rich and complex and we have done our best to condense the notes that we received from Stuart Argabright. All text in quotes are his unchanged words to us.

Origins:
The first sessions for what would become 'Black Rain' happened in January and February of 1988 while Argabright and Death Comet Crew guitarist Shin Shimokawa were looking to do something new. During the course of their previous group, Death Comet Crew, "the group name and sound changed as we went along ...
to the point where by the end of second phase of DCC, Death Comet was doing more punk - postpunk guitar - bass - drum machine based songs, influenced by my contact and continued readings of cyberpunk author William Gibson in 1984."

To them it only felt natural to follow up the ending of DCC with a new, more rock-based, project that channeled the Cyberpunk ethos they were already so steeped in.

Cyberpunk:
"During 1988 my partner William Barg and i were developing a whole slew of cyberpunk and tech related projects, works. [Barg] was helping manage Survival Research Laboratories, and we were working to produce a cyberpunk movie with Japanese Director Sogo Ishii ( Dir. "Crazy Family" and "Halber Mensch" w Einsturzende Neubauten)
and a William Gibson script / screenplay."

Meanwhile, Robert Longo also made his move into Film.
"I had been his de facto music director since 1984 and he asked me one day ' Stuart, what Gibson story should I make into a Movie ? '
The whole dev. took from '88 to '94 when he got the money from Canada for an Int. Co Production which was released in 1995 as Johnny Mnemonic."

The Young Gods:
"In addition to having Young Gods leader Franz T do that 'Metal Rain' remix,
he also jammed at Toxic Shock Studios with us and we did our first show opening for The Young Gods - at The Pyramid Club on Ave A ( ! )."

"Thurston Moore was there talking to Jim when we arrived at Jim Water's Studio on W. 14th St. ( famous Studio where Sonic Youth and many others worked ),
I only knew him a little, but we chatted small talk for a few and he left.
Previous time i had talked with Thurston was on E 8th St. one afternoon when he stopped me on the street and asked if i knew where he 'could find a job'."

The Young Gods eventually got signed to Interscope "along with NIN, Helmet, even Cop Shoot Cop got signed ( for one record ).
We fully thought we could catch that wave ...
In the end , we never found a good label while we were a 4 piece.
And could only release two of our own cassettes we sold at shows,
plus TPOS Records did the "Live At Gas Station" tape of the show with GG Allin ( his last )."

"Having already had an ' Industrial' culture / subculture out there in both UK and US ,
BR tended towards something a bit newer, more bio tech infused, not so 'mech'."

Keeping things DIY, the group did their own graphics .
One collage from this era became the cover of BR's "Dark Pool" on Blackest Ever Black in 2014.